Take medication for your bones? Please read this! 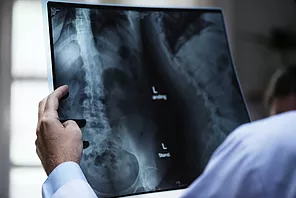 Drugs beneficial to many patients with bone density problems are commonly called Bisphosphonates. Bisphosphonate drugs have been very effective in slowing down the destruction of bone often associated with cancer and osteoporosis. In fact, they have become very popular over the past decade for many diseases that decrease bone density.

Generally, osteoporosis sufferers take a smaller dose of bisphosphonates. While there have been a handful of cases of osteonecrosis (or bone death) reported among this group, the incidence is much lower.

Unfortunately, the long-term use of heavy doses of bisphosphonates is believed to cause death of jaw bone for some people. Osteonecrosis occurs when the blood supply to the bone is decreased. Cancer patients often receive heavy doses by IV for an extended period of time and have shown an increased incidence of destruction of bone in the jaw.

Osteonecrosis generally presents as bone that is painfully exposed in an area where dental surgery, such as the extraction (removal) of a tooth has been performed. It can cause the loosening of adjacent teeth and/or swelling. It’s most common victims have been on long-term bisphosphonate therapy for cancer.

Some doctors recommend stopping the use of bisphonates for a few months before and after necessary dental surgery to decrease the risk of osteonecrosis. Unfortunately, these drugs tend to stay in the body for several years, so it’s hard to gauge how effective this is.

Surgical correction can make this condition worse. The most common therapy associated with osteonecrosis is long-term use of antibiotics and rinsing with antibacterial mouth rinses. This tends to decrease the likelihood of further complications due to infection.

The risk of developing osteonecrosis is influenced by several factors. These include the chemical composition of the drug, the way it is administered, and how long the patient has taken the medication.

Whether or not you should continue to use this drug will depend upon the advice of your physician and dentist. It may depend upon the severity of your osteoporosis and your overall oral health.